Open international ideas competition for the design of urban blocks in the Aviapolis area in the city district of Veromies. Housing, workplaces, green areas as well as public and private services are planned for the competition area.

«No matter how current, every human landscape has a cultural significance, our human landscape is our involuntary biography, it reflects our tastes, our values, our aspirations, even our fears in a visible way.» Lewis Baltz.

Taking this look, we approach the project assuming the landscape intervened by man in all its dimensions (human, urban, landscape, social, ecological, metaphysical …), proposing the construction of this through the incorporation into the project of the light, climatology, geography, the modulation of colors, lights, shadows …, of the aesthetics of the sublime, where man experiences contradictory sensations of fascination and impotence (for the ungraspable); a mystical spirit, where the gaze crosses the fabric to get lost in the distance. The emotion and contemplation of nature constitutes the charm of the landscape.

The project originates in the opportunity to create, through architecture and its ability to provoke and excite, a meaningful experience that marks and makes aware each one of its visitors.

The building is a monument and memorial. It is installed around the topography of Mount Yukhyang with a geometry that resignifies the historical epic of the explorer in front of it, recovering the memory of the place that was a defensive bastion.

Its urban integration makes it a highlight in the recovery of the port area based on a model of public space that prioritizes the walker.

The memorial building responds to this condition by:

* The assumption of a discrete height that rises punctually as a visual reference.

* Full pedestrianization of the scope of action, taking the character of atrium the entire proposal.

* The volumetry of concave and convex traces that establishes a facade of neutral condition and that contains the program, densifying according to requirements of public or private enclosures.

* The geometry of known and assumed traces appropriates the interstitial space left by the zoning of areas of use / activity, the pre-existences, the overwhelming presence of Mount Yukhyang, focusing attention on nature and landscape.

* Erratic circulation (not directional), in the logic of the walker without a defined destination.

The program is organized winding on the ground and divided into two large blocks distributed on three levels (ground level, ground floor and upper floor).

A subtle combination of transparency, translucence and opacity constitute the materiality of the built mass

Functionally, the project is composed of three buildings that delimit the plot leaving the free space inside. On the one hand the Tourist information center, Yisabu Memorial Hall and Dokdo Experience Space, two united museums that allow a common lobby, The Culture and Art Village on the other hand, where the houses are arranged on the upper floors. 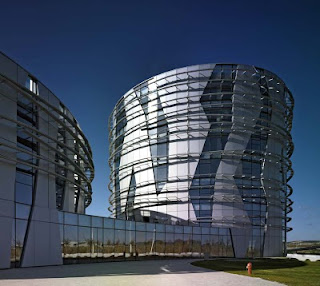 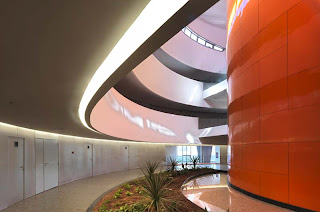 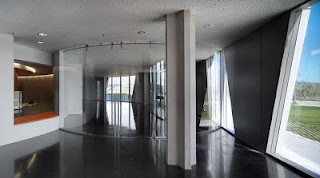 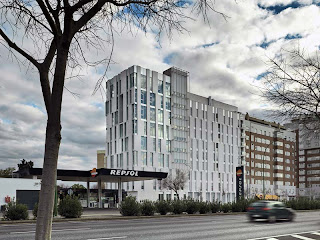 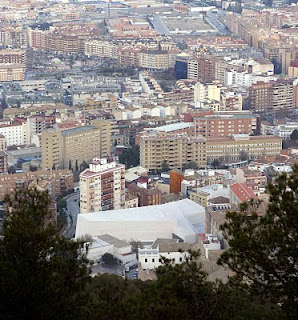 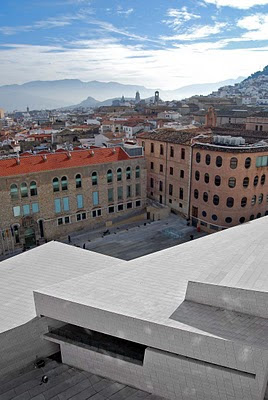 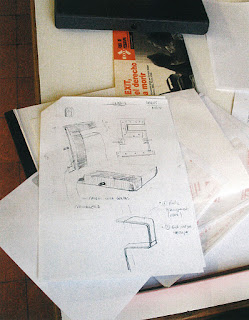 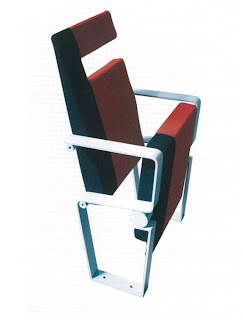 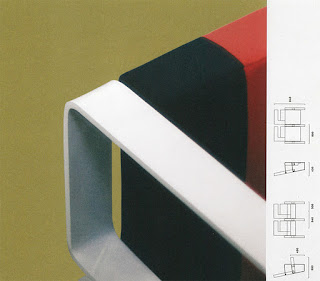 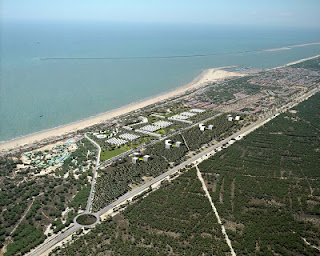 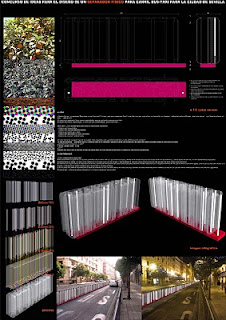 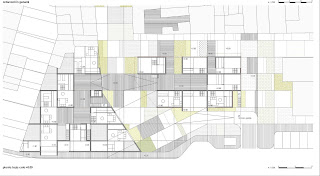 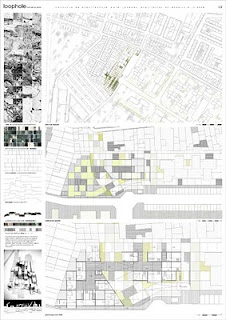 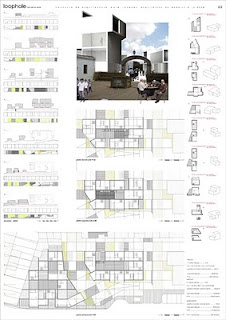 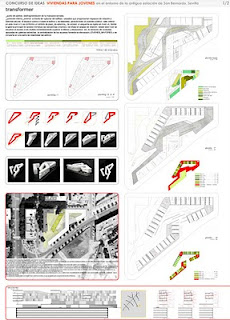 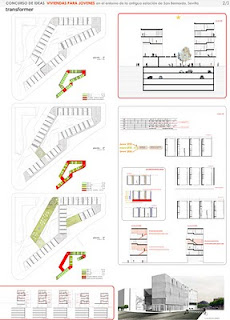 … Landscape has no determined direction nor a privileged point of view; it orients itself while its users drift. But it’s not large happenings which form the pattern of time landscape, but a mass of incidents, small unrecognized occurrences, voluntarily forgotten…

The contemporay metropolis, in oposition with the traditional one, is not any longer a stable place nor a determined form; it’s not an evolutionary state, nor a coherent movement, it’s the accumulation of various states, actions, experiences, all simultaneous and contradictory.

The city’s system of large green spaces is a complex structure which is defined by its possibilities of use as free space, by the way its vertebrated within the city and by its comprehension from a landscape point of view, which simutlaneously can be compatible with the intergration of specific and-or diverse activities.

The process begins analysing the territory’s, the city’s and their elements’ structures, lifting the urban layer and disovering what it hides, returning to the point where it all began, the innicial state (Dudok’s design), reformulating the combination of the «five» elements, adding others that are more contemporary and not physical, but social, temporary and those that have to do with movement. As a result an atemporal urban pattern as the supporting surface of the city appears which has nature as it’s basic strata. Public space is the main theme of the proposal and establishes the way the new city will grow.

To create a global pattern with multiple possibilites of developement depending on programmatic needs and the evolution of the different interventions.

This is the result of layering the different strata that structre the territory, becoming a fragment of the city (expansion band) and in contact with its structuring element, aquiring its own speceficity.

Our strategy is to make open-green space as an active part of the proposal, so as to interpret the site as a peaceful place but with an uncertain atmosphere, without defined limits. The built environment goes beyond its physical boundries to blur itself within the lanscape. This «modus operandi» is directed towards the transformation by the user of the defined geometric street into an urbanism of space. The resedential use is elevated liberating the groung floor (+/-0.00), giving it up to public space and services. This level will be affected by the access elements of the residential buildings.

The patterns is orgined at ground level, a public level where activities are scattered and services are inserted as clusters. A light and continuous box at level +6.00 holds the remaining programmatic needs, public and private parking, which as a mixing box organises relationships of the public with the services and the owners of the housing units.

Free space is doubled, public space al level 0.00 and private space above 10.50, understanding the site as a fluid relationship between open, free and inhabited space. The building is built on a meeting point of people, activities, spaces, a strategy which should go beyond, to the rest of interventions in the study area, in Morgenstond and the city.

The continuity of free space (natural) all over the proposed area and over the different levels of the section. A continuos lanscape from any level, from any point of view.

Individual autonomy is increasing, as is the diversity of social interactions within the same family, professional mobility, and the speed of communications; all of which lead to a more spread out town. On the other hand, there is a strong demand for a neighbourhood social life which needs to be rebuilt on new foundations.

spatial logics :
diversification of typologies: open plan, duplex, triplex, through simplex, gardens, terraces, courtyards,etc.; convertibility of space: transformation and adaptation of a dwelling according to: the evolution of the family living in it, a succession of different occupants, changes in the overall requirements of the housing programme; creation of morphologically complex layouts: scattered houses, housing clusters, mix of houses and flats, typological mix of flats, etc.

To live somewhere is no longer just to be «at home», cut off from other daily practices: work, shopping, recreation, etc. While new technology links us to a virtual world, it has, in fact, brought about a demand for neighbourhood social intensity. We now want to work from, or nearby, to where we live, to shop locally, to invent new ways of social interaction, and to fill our free time with sporting and cultural activities without being obliged to travel great distances from our homes.

how can we give housing districts a new dynamism, and favour the spatial intensification of the social life that can take place within them?

A variety of approaches can be developed, indeed interwoven:

– assembly of different forms of housing, that is, the creation in a neighbourhood of different types of dwelling designed for inhabitants with different households: dwellings for the elderly, students, single-parent families, etc.;
– addition of associated services: new local shops, public services, sports and cultural facilities, etc.;
– creation of conditions that will allow for the existence of a home/workplace interface: work space associated with the home, technologically high performance units for skilled trades and professions, small units of offices.

The highlighted objetive is to work at research into principles of urban coherence in the dispersed town, but concentrating on specific elements that go beyond the historic principles of the old town, or of traditional urban composition.

The environmental approach must be linked to urban restructuring, in order to work:
-on the scale of an entire area, where it is a question of creating compact residential platforms that both liberate and integrate natural space, that combat noise and other pollution from road and transport networks;
– with the whole range of scales in order to introduce the question of nature as an element associated with housing (garden, neighbourhood space, park, etc.).

The posibility to change partions walls, toilets and bathrooms units and to change the program (from housing o office). A big neutral space can perfectly cover almost all spatial wishes. This change towarsd flexibility and neutrality makes new construction methods necessary. Skeleton systems in steel or concrete offer flexibility in two directions ane are more useful than sistems based on constructive partition walls (like tunnel system).
To create more flexibility the floors systems becomes a very important item. Sandwich floors allow the integration of all ductwork and can therefore affer flexibility for toilets and bathrooms.

The nuclear family has dissapeared and with her the standar organisation of an apartment. Residences become bigger and bigger because of the enormous growth of the welfare in the last decades. For the organisation of an apartment this means two things. Firstly, there is less privacy, secondly, the living room becomes larger, as there is no need for more sleeping rooms or extra and bigger bethroom units.
The new typology of the 21st century is the loft. The loft is more an enclosed outside space than a clasical room. It is a platonic internal landscape, a piece of emptiness in the city. Its success is on one hand a sign of a more personal and individualised way of living. On the other, it is a reaction to the decay of urban communities and public space. In the loft yuo can create yuor own paradise and cut all relations with the public sphere to a minimum, with the new media people are well connected and can find and receive almost anything they wish. The loft is a mix of public and private; it can be home, office or both. In former times people went on the street now they prefer to stay at home. 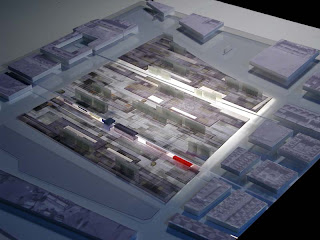 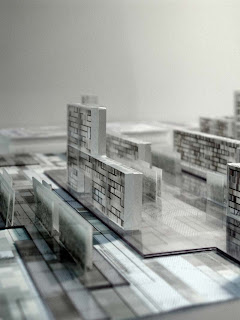 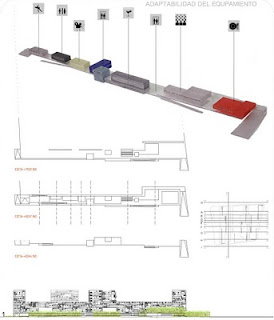 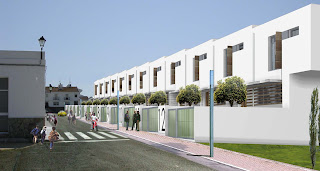 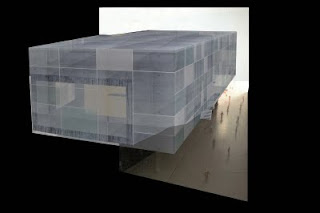 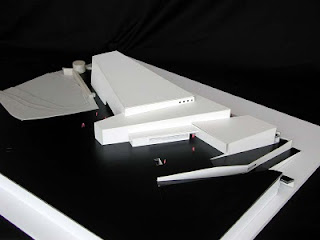