The main theatre space is articulated as three clearly distinguished volumes occupying a platform at a height of 572.00 m. and housing the principal spaces in the complex: the main auditorium, the lobby and the rehearsal hall. Complementary spaces such as the car park, the theatre offices, the dressing rooms, storerooms, etc., are located beneath this platform.

From the outside the building’s three structural blocks appear as three enormous promontories silhouetted against and harmonising with the hill of the Castillo de Santa Catalina. They are arranged on the site in such a manner as to create a series of open spaces of differing sizes (plaza, garden, terrace…).

The architectural agenda is clearly resolved by dividing the theatre’s activities into three areas: the main auditoriums, the complementary spaces and the car park.

The auditoriums occupy the highest part of the site, with the lobby lying between them and providing access to both.

The main auditorium comprises a stalls area and a gallery with 600 and 210 seats respectively. There is a stage, an orchestra pit, a gridiron, a scenery storage area and audiovisual booths.

The rehearsals and music hall has a smaller stage and is equipped only with stalls, seating 220 spectators, and projection and translation booths.

The lobby, located between these two auditoriums, is a large, elongated, split-level covered space. Its large glass walls and passages project it outwards towards the exterior spaces (plazas, terraces, etc.), effectively drawing these spaces in and making them part of the lobby itself. This area also houses the public toilets, the cafeteria and the cloakroom.

Complementary spaces are accommodated on the levels beneath the main structural platform. Actors’ and dancers’ dressing rooms are at a height of 568.00 m., while the administrative area, the ticket offices, press rooms, loading bays and storerooms are at 564.00 m.

The public car park, with a capacity for 171 vehicles, is located on the same level as the complementary spaces, behind the bay accommodating the dressing rooms and the office area. It is directly communicated with the lobby and its associated exterior spaces by stairs and elevators.

Following the discovery on-site of archaeological remains corresponding to Jaen’s old city wall, these remains were integrated in the project. Their inclusion contributes to recovering the city’s heritage and historic memory in two ways:

The remains of the Puerta del Aceituno, protected and visually embellished by a portico, thus become part of the theatre structure itself, making the ticket office a symbolic place of access and the first point of contact.

Because of its proximity to the theatre space proper, the wall of the ticket office facing the archaeological remains is covered with mirrors as a means of extending, enlarging and dignifying this part of the building as much as possible. 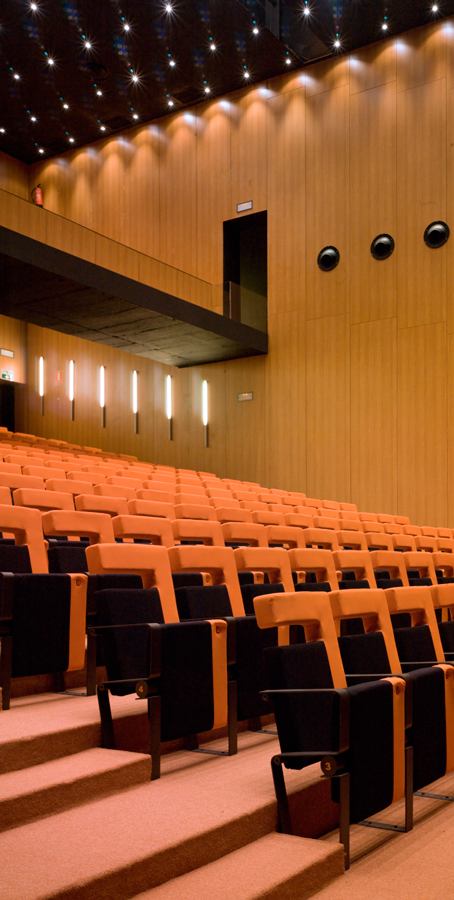